I woke up today and decided it was time for a project.  I had picked up an old Red Flyer wagon that a neighbor had discarded months ago.  I had long wished I hadn't thrown my own children's little red wagon away so many years ago.  This one is rusted and pitiful, but with a little work it can be good as new and today was going to be it's first day of reconstruction.


I found how to instructions online and headed to Hobby Lobby.  This was my "fatal mistake".  The Lobby is a treasure trove of finds, so it is well worth moseying up and down the isles.  I was in the upholstery isle when I found it!  It was perfect, this great fabric that would look fabulous on anything I wanted to have reupholstered!  Upholster what?  Who knew, but that fabric was perfect...and it was 30% off, add to that the Lobby phone app gives you an additional 40% off...that's 70% off...I needed this fabric!  I Googled how much fabric I needed to cover certain types of chairs, maybe two?!?  I decided I needed about ten yards to be safe. 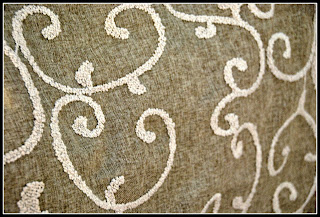 I pulled that bolt from the wall, hauled it to the counter and the little, very, very old lady slowly, very slowly measured out 6 7/8's yards of fabric.  Not enough.  She told me I could check the 2 other Lobby's to see if they carried the fabric and she would hold my fabric until 6:00 p.m.  Off I went.

I was on a mission.  Had no reason for the fabric.  Had nothing in particular to cover.  Loved it.  Wanted it.  Was going to hunt it down.  So I drove about 10 miles through horrible traffic to another Lobby way out on Hwy. 281.  Dead end, no fabric.  Back in the car, it was now noon, my stomach was hungry.  I spotted a Jamba Juice in the far corner of the massive parking mall.  Of course it was right across from a Starbucks so there were no parking places anywhere near...suddenly, break lights, a parking spot!
I backed up.  Huh oh...there it was, the dreaded crunch, metal against metal...breaks hit, I slid the car into park, cut the motor, got out and the entire back left portion of my car looked like Edward Scissorhand had run his fingernails across it. 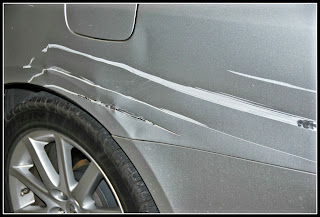 I looked up and there was this poor young man driving one of those little mule vehicles that tends to the garden areas of the open malls.  Louis, the driver was humble and sorrowful.  I was quick to admit fault as I had been backing up when I shouldn't have, but here came his boss.  I told him exactly what happened and then repeated it to the mall security…"police lights" flashing!  One and a half hours later all "reports" had been filed and we were on our way.  Did I mention that Louis's vehicle was without blemish?

I knew I needed to get home and call my insurance company, but that fabric...I still had one more Lobby to check out.  I know, you would think...but, no that fabric, I was on a mission.  So back into town I went. The third Lobby, no fabric.  Oh well, I would just have to make 6 7/8 yards work on one chair, that would be plenty for something.

Back I went to the original Lobby.  The very old sewing department lady had told me she would hold my fabric until 6 p.m. remember?  I had put my name on it.  Nope, no fabric, my heart raced as I stormed to the isle where I had first seen the my fabric.  Ahhh, there it was.  I grabbed that roll, paid for it and walked out the door with purpose.  Mission accomplished.

It wasn't until I got back in my car driving home that I replayed the events of the day.  Louis came to my mind.  His words began to linger within me.  As we sat together for 1 1/2 hours waiting, for nothing, we visited.  Louis was 33 years old.  He had 3 small children.  His mother had died a month before.  He felt terrible that he had "ruined" my day, he told me with watery eyes.  I looked Louis in the eyes and held out my hand.  I introduced myself and told him I was much older than he was and he needed to listen to me.  I told him accidents happen and this was a simple accident.  No one was hurt and the harm done could be fixed. He asked me why I had two baby car seats in the back of my car?  I explained I had grandchildren.  He put his head in his hands and thanked God there were no grandchildren with me.  I assured Louis that I was fine and that I was thankful that we had this opportunity to meet.  He was a gentle man and it had been a pleasure to spend time with him.  He smiled shyly.

Do I wish this incident hadn't happened?  Of course, it will be a hassle to get the car fixed, get a rental and pay for the deductible.  Am I thankful I had an opportunity to meet and spend time with a self-effacing and humble man, yes Louis was my gift today.

Hebrews 13:2 "Remember to welcome strangers, because some who have done this have welcomed angels without knowing it."