In the past 7 ½  months since Steve left this earth, I seem to have been one busy person.  I’m not sure I have followed one bit of the advise that is given to a grieving spouse.  You know the sage words of wisdom, “Don’t make any major decisions for at least a year after one’s spouse has passed away.”   Well, I seem to have greatly colored outside the lines in every way possible. Call it scribbling if you wish, but at the moment, each of my decisions has seemed to make perfect sense or at least be justified.  See what you think…

Who knew that I would be the new mother of a 9 year old Wheaton terrier, Lucy Belle?  Lucy B has made me laugh, she has frustrated me with her “sleepy bladder,” her ability to escape a 5 ¼” fence opening when her head is a full 5”, her desire to jump in the car with me, or anyone who happens to drive by so that she can hang her adorable mangy head out of the window while her tail swipes me in the face with each happy wag.

This darling hunk of hair has given me so much joy since I adopted her in September that nothing she could do would lower my attachment and love for my furry child.  Who knew that in almost 8 months I could spoil a dog rotten to the point that she is now making most of the household rules?

Who knew that almost 8 months ago this home flopping domino effect would have taken place.  Brooke and Jared moved into a new home in November causing me to buy their house early.  I came back from a New York trip in December, to find a telephone message from old neighbors that smoothly enabled me to sell our home with the greatest of ease and begin remodeling my now almost, new home...who knew?

Who knew that I would buy a 1970 Chevy C10 sidestep truck because Steve and I had always talked about owning a truck, a new truck, and yet we never actually bought one, much less a 44 year old truck?

Now on this note, I would like to make a few personal observations.  I realize that in 8 months I have bought a 9 year old rescue dog, sold my wonderful home and bought a 44 year old truck.  I understand this is far from “normal” for a widow, not to mention, I have made trips to Santa Fe, New York and Israel in the last 7 ½ months and am planning a trip to Costa Rica in the Spring...this is simply bazaar behavior.

I see all of this clearly and realize I’m maybe, a bit out of control.  There are, however, some widows (really hate that word) that might instead of buying said dog, house, truck spend the same amount of money on say a face lift, or perhaps a boob job, or whatever it is women do to try to make themselves feel a little better about their crummy situation.

Now, don’t get me wrong, whatever it takes to get someone through this ruggedness is fine with me as long as no one gets hurt in the process, I’m not casting stones here.  I’m simply saying that instead of having people come up to me and say, “Wow Janet, you look amazing!”  They might find themselves saying, “There goes that crazy old widow woman driving around in that rattly old truck with her shaggy old dog hanging out the window...What’s up with her?”  Who knew? 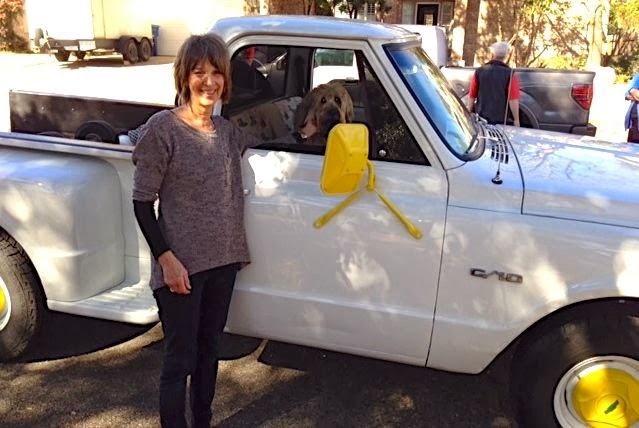 Who knew that to continue the domino effect of house shuffling Brent will soon own his own home in Austin?  How convenient for me!  In all my downsizing I can now hand down all my “stuff” that will not fit into my new home to my children...this way I really don’t have to part with any of my treasures.  Who knew?

Do I wish for my old life back?  In a heart beat, but that is not my call so I have chosen to go with this crazy flow, roll down the windows of my ’70 Chevy, let my 9 year old dog lap in the fresh air and move forward...who knew?