My Heart has Room for More...

I think it was several weeks after Steve’s death that I began questioning my timing.  I was finding the house so empty, I was feeling the need for companionship of my own and felt a little sketchy about going on line, but knew people had and had good results in the past.

So I took a deep breath and I just dove in.  I signed up, filled out the 12 page questionnaire (no exaggeration) and hit enter.  It took several days for Tonya (the staff woman with the agency) to give me a call back.  After 30 more minutes of in depth questions she said she felt a match for me might be rather difficult considering my situation but, she would do her best.

You know it’s meant to be when you receive a call from Tonya less than 20 minutes later saying, “I found a match for you, I think it’s perfect!  Go on line and look at the picture I just sent.”  Not knowing Tonya, I still remained a little skeptical.  I pulled up the picture and oh, my heart melted...it was the huge brown eyes and long sandy blonde hair that got me.

A little side note here, the first time I really met Steve, he was taking clothes out of his dryer.  Bos and I walked into his backdoor and our eyes met and as corny as it sounds, my heart literally skipped a beat.  I remember thinking, oh whoa what is this feeling?!?  Well, this recent photo encounter was not quite on the same level as seeing Steve but it made me realize my first impressions are spot on.

I fell in love right then looking at that sweet picture.  I called Tonya back and said, “I want her!”  That’s right her, oh didn‘t I mention I was looking for a rescue dog?  A Wheaton Terrier in particular. You know like the dog in “Annie"--Sandy.  I must admit I’m feeling a little like Little Orphan Annie right now and the thought of wrapping my arms around a “Sandy-like dog” just makes me want to start singing, “The sun’ll come out tomorrow, bet your bottom dollar that tomorrow there’ll be sun!”   But, I had very specific expectations:  she had to be great with small children, good with other dogs, housebroken...no not a puppy, no I didn’t want siblings, no behavioral issues, just an older (like 4-5 year old) dog. 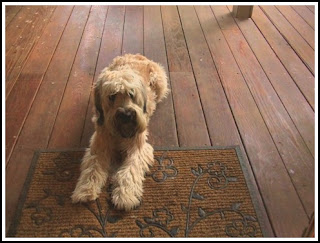 Well, it turns out Lucy Bell a.k.a. Bella (Lucy comes from another long story about Steve that just wouldn’t translate here, but it’s worth naming a dog after) is 8 years old and will turn 9 on November 7th...we will celebrate our November birthdays together--perfect.  I want this precious dog.  She came from a family that once divorced, the mom and child moved to a home without a yard and the dad had no time for Lucy Bell, thus deciding to give her up to S’Wheat Rescues.

The process of adopting a rescue dog is worse than adopting a large child.  I filled out the aforementioned online form on findapet.com.  Then Tonya called, from there the match was made. Tonya called 2 of my references, my vet, I had a home visit and paid $300 for an almost 9 year old dog that I had to drive to Dallas to pick up and sign a contract saying I will “love, honor and obey this dog until the day I die” or something to that effect.

Want this dog?  It is in my DNA.  Our family always has had dogs.  My earliest recollection was of our Welch Terrier, Tippy.  I would dress that poor sweet dog up in toddler clothes and make her walk around on her hind legs...she was my best friend (kind of pitiful really).  Then there was Tosha.  My eldest sister, Barbara was teaching school in Houston and brought home this fluffy little black mix puppy giving it to us, saying we needed to replace Tippy.  My mother said, she had just gone through a terrible time putting Tippy down and wanted NO MORE DOGS.   My father, (I have his DNA) couldn’t stand that Tosha was locked up all day in an apartment while my sister taught and apprehended the dog and she became ours.  Tosha would ride on the bow of our boat while my father would fish the day away.

We loved our dogs.  The day came when my mother had to put Tosha down and she was adamant...NO MORE DOGS.  So my father began collecting, rather fostering lake animals.  There was an old lab he named “Old Yeller” (never knew their real names).  My father would stand on the shore of our small lake and call to him and he would swim across to my dad and spend his days with him.  Then there was Blue (so black he was Blue), then there were a variety of kitties, and even some ducks that my father named and would call in the mornings so they could be fed.

As an adult I have always had a dog or dogs, usually schnauzers.  When Steve and I finally put our last schnauzer down Steve said, “You can have me or a dog…”  We were traveling a great deal of the time then so I reluctantly agreed and Steve had that doggie door sealed before I could blink.

I went to Dallas on Sunday.  Spent the night with Bos and Robert.  Bos and I went to a vet in Highland Park to pick up my new ward.  We were issued back to an examining room to visit with the vet.  Dr. Smoctor entered asking if I had had a chance to go over “Bella’s”medical history...uh oh…”No, I wasn’t aware of any complications.”  Bos is starting to laugh as only Bos can.

Dr. Smoctor ever so gently begins to tell me that Bella a.k.a. Lucy Bell has chronic allergies, seeping ear infections, that she is on steroids and anti-inflammatory meds and I will need to see my vet to check on what type of diet she will be needing.  Oh and she has numerous tumors that I might want to have biopsied for cancer.  I can’t even look at Bos at this point and she’s a huge dog-lover.  “Oh and the only other thing is that Bella has some real anxiety issues.”  End of Dr. Smoctor’s report.

My throat becomes thick, I think in my heart “don’t ask, don’t ask” but I know in my head I have grandchildren that are too precious to me as I blurt out, “What exactly do anxiety issues look like in a dog?”  Well, in Bella’s case, because she was neglected she would dig her way out of penned confined places and run off...okay, no biting, I can do this, I can love this animal into being the animal she is meant to be!  As Dr. S. is walking out to get Bella she says in an extremely too calm voice, “Bella is a very fine dog...she just has special needs” she shuts the door.

I look at Bos and we both burst out laughing...this is what I really need right now, a dog with special needs?  We both know Steve is looking down at me and shaking his head saying, “Janet, Janet, Janet…”

In bounds Lucy Bell!  She prances up to me like she’s known me all her life.  She nuzzles into my face and I’m a goner, lumps, bumps and all.  Everyone says that 60 is the new 40, well in dog years I think 9 will certainly be the new 5.  I am Annie and Lucy Bell is Sandy and now we can sing, “When I’m stuck a day that’s gray and lonely, I just stick out my chin and grin and say, Oh the sun’ll come out tomorrow…!”

Lucy Bell and I made the drive home smooth as silk.  We went to see our vet today and she thinks her allergies were due to fleas!  She is on heartworm meds, flea/tick meds, fish oil and glucosamine chondroitin, which by the way so am I (the last 2).

We are home, we are happy and we will grow old together and love one another and be faithful to one another...and she better quit peeing on my carpet!

Oh I’m glad my heart still has room for more. 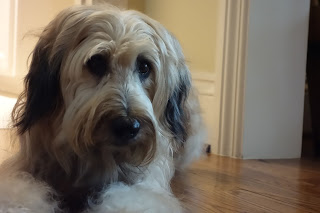 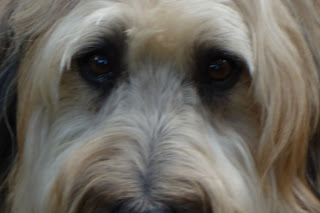 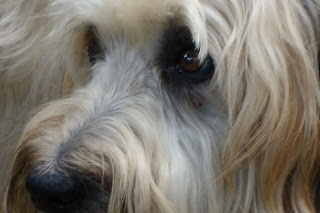