Most of you know that I adopted Lucy Bell Boswell about 5 weeks ago. I have had many questions about how Lucy and I have adjusted to one another since both of us are somewhat past our prime and rather set in our ways.  So I thought I’d bring you all up to speed on my dog, as the vet said had “high anxiety.” 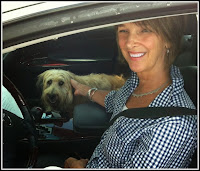 Let me preface all of this by saying Lucy Bell is not anxious, in the least.  She is simply needy and wanting  to be loved and cared for and that has been an easy task.  Our bonding was fast and solid and there will be no separating us, we are meant to be together.  But…"in every life some rain must fall”  I mean, after all no relationship is perfect and we all have our issues.  So where should I begin?

At the beginning...The first day I brought Lucy home we had a long drive from Dallas to San Antonio.  Lucy was meek and timid, but a very good driving companion, sleeping most of the way home.  I got us settled, ate dinner and around dusk thought I’d take her for a walk, sort of a test run.  I had just bought some new Nike Free tennis shoes to wear on an Isreal trip and thought...this would be a good time to break them in, short walk and all.  So we sprinted out the door.  I quickly found Lucy was used to leash walking, as she was very behaved.  Remembering the vet had told me she was quick to run away I had a firm grip on her leash.  Brooke called me and I was telling her about Lucy and our trip home as we strolled through our neighborhood.  So picture this, Lucy’s leash in one hand along with a bag of fresh poop--what a good dog, cell phone in the other, new shoes, it’s still hotter than blazes so I’m in wind shorts and T-shirt and SPLAT!!  I looked like a large watermelon that had been dropped from the sky.

My first thought was pain, my second thought was The Dog.  When I fell I must have landed on my left knee, hip, elbow and then tried to brace myself with both palms of my hands.  The leash and my cell phone flew out of my hands, skidding across the pavement.  All of could think of was this dog that I had adopted not 7 hours earlier.  The vet had said she had a high risk of running away.  In that split second all I could picture was Lucy Bell hightailing it off into the woods, escaping our fenced neighborhood and getting smashed like a grape by on coming cars on some busy parkway.  So my immediate response was to try to reach for her leash, as much as I was able while lying flat on my stomach, I looked like Spiderman stuck on a high window.  The only difference was he was vertical and I was horizontal in the middle of the street.  Strangely LB sat down like a good Wheaton terrier and simply waited for her master...Oh, I had a Lassie dog!   “Lassie go get help Timmy, he has fallen in the well!”  I was easily able to hold on to her. 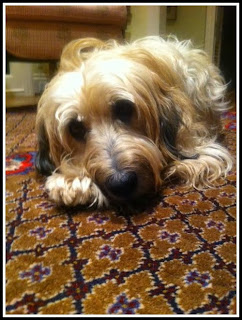 "If there are no dogs in Heaven, then I when I die I want to go where they went."
-Will Rogers

Suddenly, I hear this voice coming from my right.  The only young neighbor we have comes out of his house in scrubs and I hear, “Ma’am are you okay?  Let me help you up?”  Mortified that someone had seen this dreadful splay of my body.  I quickly replied, as perkily as possible, “Oh, I’m fine really.”  Watching me struggle to scrape myself from the concrete he kindly came to my rescue.   As I was rising I reached over, grabbing my cell phone and simply said to Brooke, “I’ll call you back.”

In full upright position I noticed blood was free flowing from all parts of my body.  One of my new shoes was turning red and blood was dripping down Lucy Bell’s leash.  Looking at the street I realized the treads of my great new Nike Free’s must have gotten caught where the pavement had buckled and I had landed on one of those metal seal embossed City of San Antonio manholes.  (Do they call manholes embossed or is that word only used for stationery?)  Anyway...this kind, young physician asked me to come in so he could help clean me up.  “Oh no, really I’m fine,” I was, to use a high school term, gagging from embarrassment and the pain was becoming noticeably worse.   All I wanted to do was get home.

As I turned to hobble off I became twisted in the stream of doggie poop bags that had come unrolled from the leash when it went crashing to the ground.  The kind man offered to at least let him roll the bags back into the container.  Nodding I stood as this very sympathetic young doctor painstakingly rerolled the brand new very long stream of doggie bags.  I 'm not sure but considering the meticulousness of his rolling I think he might have forgotten he wasn't doing plastic surgery on Heidi Klum, only  re-rolling poop bags.  Finally, his surgery job complete,  I was able to thank him and totter home.

Arriving home I realized my fall had taken all the skin off my elbow and forearm, the palms of my hands were a swollen mess, as was my scrapped and battered knee and I had a lovely goose egg on my left hip.  Fortunately 6 weeks later there are no lasting scars, the only remaining reminder is my now purplish blue goose egg that continues to reside on my hip.

Maybe all this had to happen so that I could realize that I am now mother to a Lassie type dog, Mary Poppins, perfect in every way!  Well, “not so fast Tonto!”...First of all, Lucy Bell began tinkling in the house...hmm, the rescue people had said she was housebroken.  I decided she was in a transition period and this would be short lived. I took great pains to take her outside often for her to have regular potty breaks.  She did fine during the day, but nighttime...she can’t make it through the nights.

I bought her a wonderful large comfy pet bed, put it in the mudroom and began shutting her in at bedtime.  Waking in the morning I found she had tinkled on her bed...weird, I thought dogs didn’t go where they slept?  So I decided to leave her outside at night.  The first night it was around 10:30 p.m. and my doorbell rang.  I was a little freaked out by someone ringing my door at that time of night and hesitantly went to answer.  There stood my neighbor with LB in hand.  She had somehow escaped from the back and he found her sitting at the curb in front of my house.  Lassie turns Houdini. 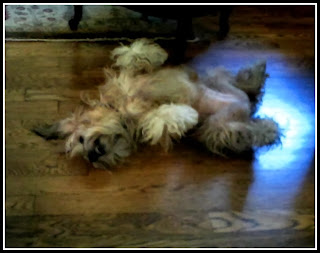 The next morning I hid and watched to see how she was breaking out and to my amazement I witnessed my 32 pound dog birth herself into the front yard by squeezing her 5 inch head through 5 ¼ inch wide wrought iron fence bars.  Her left shoulder followed by the right one and then with a hoist of her back legs she sprang free.  I promise you it reminded me of a large child coming into the world.  My fear is that LB is now gaining weight because she is so loved and happy and that one day she is going to find herself stuck like Winnie the Pooh after a major hunger binge.

Second, no this would be third little issue.  When I adopted Lucy Bell she was on steroids due to allergies.  I was instructed to wean her off slowly in hopes that she would have no more problems with “her scratching” once she was in a new environment.  The first couple of weeks LB was great, scratching only a little, I reduced the steroids, thinking, piece of cake, no problem.  Well, wrong.  Once the steroids were out of her system poor Lucy began going crazy, running herself in circles and crying out loud, scratching herself to death.

Back to the vet we went, here is why I’m living my dogs life.  First the vet said we needed to put her on Fish Oil to thicken her coat (as she had scratched so much of it off)...hmm that’s kind of unusual my ob/gyn has me take Fish Oil.  Then she suggested we put LB on glucosamine chondroitin to loosen her hip joints.  The vet said because she was an aging dog it would help her maneuver better...I too take glucosamine chondroitin to keep my joints from getting stiff.

Now the light begins to come on, I have an 8 year old female dog, in people years we are the same age...we are taking the same meds.  But oh not so fast, the vet said the bedwetting (let me say right now, I am not yet wetting the bed) may well be due to the fact the Lucy Bell’s bladder is old and when she falls into a deep sleep her sphincter muscles also fall asleep.  She then suggested LB be placed on hormones to help with her nighttime mishaps. Hormones...great, now I have a dog who’s taking all the same meds I am.  Oh but no, she is also on Claritin for her allergies and after 2 weeks of crazy scratching she is back on steroids and I’m thinking..I wonder if my next prescription will be for steroids as well? 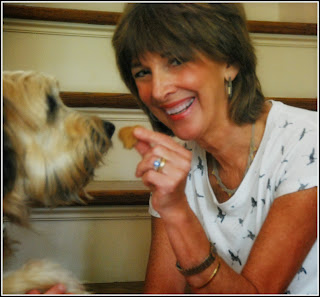 "Petting, scratching, and cuddling a dog could be as soothing to the mind and heart
as deep meditation and almost as good for the soul as prayer."-Dean Koontz


So okay, I have now spent a little over $2,000 in 6 weeks on my newly adopted wonderful, lovable  8 year old Lassie-esk dog.  A dog that could easily go into my medicine cabinet and slurp up all my meds and be cured.   Oh but, we still have to go back to the vet next week for another urine specimen to make sure her bladder infection is cleared up...oh did I forget to mention she’s also on an antibiotic for a bladder infection?

Yep that’s my Lucy Bell!  She loves the grandchildren.  She loves to walk with me every morning.  She has become very popular in the neighborhood and has made friends with all the other dogs.  She thinks she can out run a deer, squirrel, skunk, possum, and even a silver fox.  She continues to sleep on a fresh towel every night in the mud room because of her sleepy bladder and she is still able to turn into Houdini when she’s left in the back yard too long.  What was it Bette Davis said, “Old age ain’t no place for sissies!”  Well, Lucy and I are making the most of it, side-by-side. 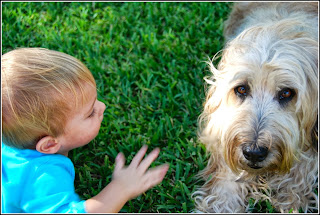 "Dogs are better than human beings because they know but do not tell."- Emily Dickinson 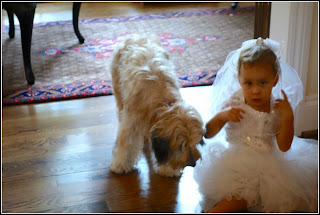 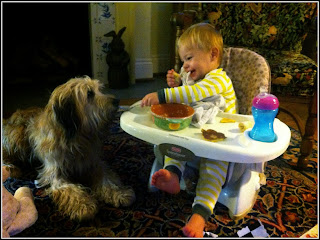 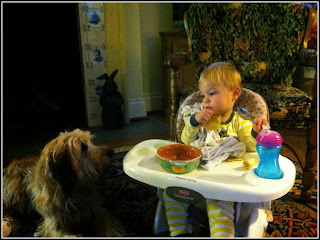 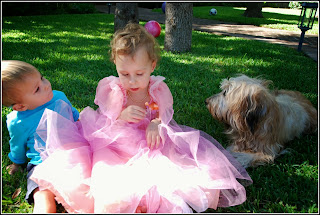 “A dog is the only thing on earth that loves you more than he loves himself.” -Josh Billings 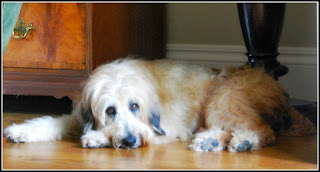 "Animal lovers are a special breed of humans, generous of spirit,
full of empathy, perhaps a little prone to sentimentality,
and with hearts as big as a cloudless sky."
-John Grogan "Marley & Me"