Most people who knew Steve professionally or casually knew that he was highly intelligent, gracious to a fault, kind hearted, serious, conscientious of others, and a rule follower to the nth degree.  These people probably knew that Steve was the hardest of workers, that he honest to a fault and if you asked him to do something for you, you could be assured it would be done before day’s end. People were aware that Steve was a good golfer, as well as a good tennis player.  They may not have mentioned that he was absolutely sexy and completely adorable, but I know they surely thought it.  He was Steve! 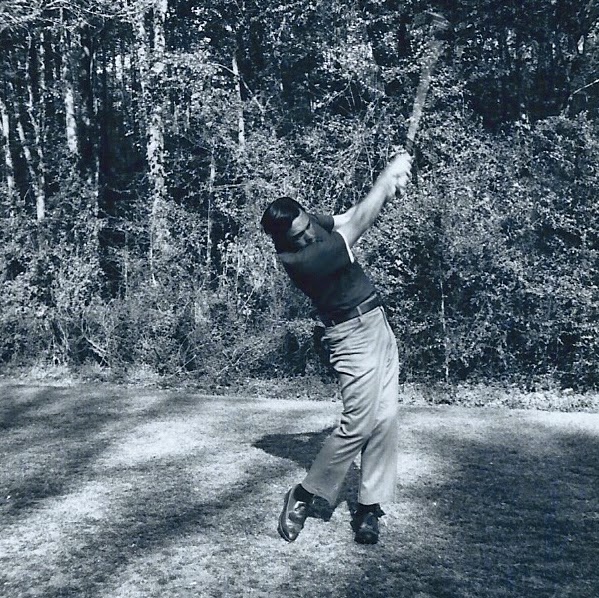 There are always two sides to people.  Steve had his public side, but there was a private side that only family and very close friends knew of Steve.  It seems time to now share the other side of Steve.  Enjoy!

Steve had a thing about socks, white athletic socks.  Until the day he died he was insistent on always wearing them when he was just hanging around the house.

For many years Steve’s favorite thing to do was the well-known, Tom Cruise move, you know the one in “Risky Business.”  Knowing I was in the back sitting room, watching television or on the computer, Steve would start in the kitchen and would run until the friction felt perfect for sliding the length of our long hardwood floor hallway.  He would land proudly in the little sitting room, arms straight out to his side, so proud of his land surfing abilities.  It was as if he had enacted some great gymnastic feat and was constantly waiting for me to hold up a card with the number 10 on it.  When I asked Brooke what came to mind when she thought of Steveisms, this action was at the top of her list.

Steve loved to laugh. He usually laughter hardest at his own sense of humor.  Steve often reminded me of Steve Martin or Chevy Chase, or maybe a combination of both.  He would come up with some quick, cleaver statement and it would come out of his mouth so unexpectedly.  Those in earshot would burst out laughing.  I would look at Steve and he would have this look on his face that only I could read.  The unsaid was, “Boy I nailed that one, perfecting timing, WooHoo!”  He would then begin laughing along with the rest of us…the harder he laughter, it became a high pitched belly giggle. He would throw his head back and laugh with his entire body, tears running down his face.  Nothing was ever funnier to either of us than Steve laughing at himself.

Treacherous and Precocious.  These were two of Steve’s favorite words and they were grossly over used in very dramatic ways.  Anything that was potentially, possibly, slightly dangerous was always “treacherous.”  We lived near a small pot-holed two-lane, dark road that Steve renamed “Ted Bundy Lane”.  Brooke, Lynn and I were forbidden from ever going down it because if we ever had a flat tire it would be treacherous on this road.
Precocious was a word Steve used when describing children, in particular, his grand children.  Instead of using the words, bright, smart, observant, curious, highly intelligent, Steve’s word was precocious.  Dylan would be reading some very adult book and Steve’s would say, “How precocious Dylan is!”  Elena would come up with some creative masterpiece, Steve’s response, “Elena is very precocious!” Harper knew all her letters before she was 2 and Steve response, “Now, that’s precocious!”  Harris smiled and held up his head early, Steve:  “You know that’s a sign of being very precocious.”

A creature of habit.  Steve ate lunch everyday exactly at 11:00 a.m., whether is was a peanut butter and jelly sandwich or standing at the front door of Chris Madrid’s with his hands cupped to the window waiting for the doors to open.  If it was 11:00, Steve was eating lunch.

Dinner was much the same.  Steve was never big on eating late.  Friends knew if they called after 6:15 p.m. to invite us to for dinner…too late, Steve had just finished.

Steve loved chocolate and he was never ashamed of hoarding it.  He could be found stashing chocolate chips cookies or chocolate cake from both me and our children and was very excited if his hiding spots were never found.

He could make the recipe on the back of a Toll House Chocolate Chip package, “start to finish in right at an hour!”(his words)  He would get a little perturbed at me when I would nibble at his dough.

He loved telling the story about how he and Lynn and David would get in the kitchen to stir up a batch.  They would battle over whether the dough was made for eating or baking every time the cookies were in their final stage, right before oven time.  The fighting became so exhausting that Steve, rational in most situations, finally pulled out a kitchen scale and weighing the dough into thirds, insuring each of the three children then got their equal share of doing as they pleased with the dough. Lynn and David eating most of the raw dough and Steve baking all of his to a crisp...just the way he loved them.

Cinnamon Chocolate Cake.  Our all time favorite dessert.  Steve had a hand-copied recipe from an aunt and he made a really mean cake.  However, when I came along, I would never follow her directions…exactly (what’s new.)  Every single time we made that cake together, heated fighting would take place as Steve would argue that the process needed to be done in exactly the order written down.  I, on the other hand, was a little less compulsive…it’s a cake.  So I’d dump the ingredients in willy nilly and Steve would come unglued.  The debate level rose until I finally would walk out of the kitchen mumbling, “you just do it your way.”   Steve’s response, “I thought you’d never leave.”

A real pearl here; this is one great method to get to eat delicious cake without having to actually make one.

Franc the wedding planner.  Who would have ever thought Steve would be the wedding planner of Brooke’s dreams?  Brooke’s desires; keep it simple, fun and classy.  Steve’s dream, to have a daughter that wanted nothing to do with being a princess bride, but did want a great wedding.  Together, Steve and Brooke pulled off their idea of what a perfect wedding should be and I sat back and enjoyed every minute of watching these two perfect this wonderful celebration. 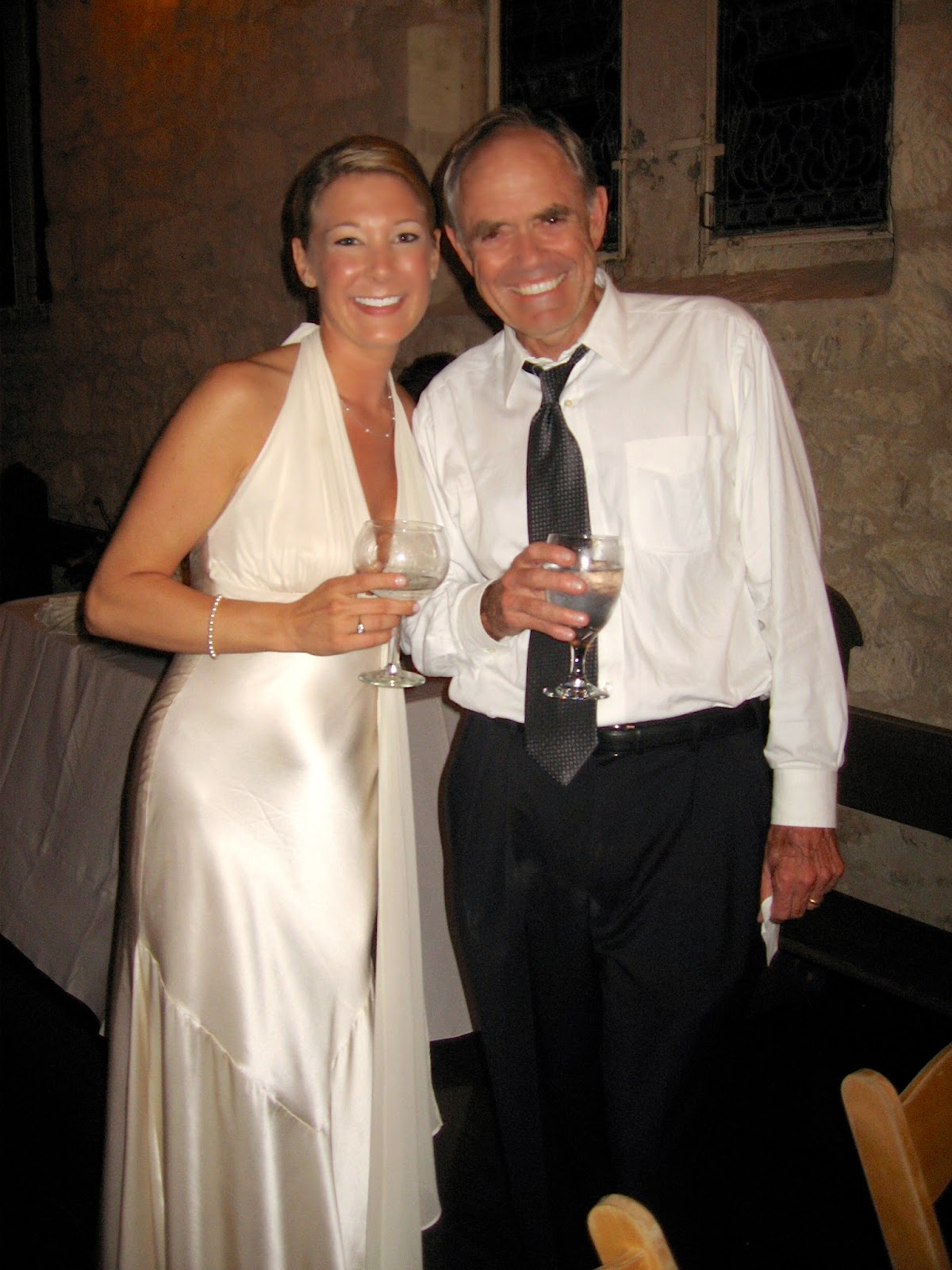 Large chested, big haired young blond women.  Steve was enamored with them.  His jaw would drop, he would gawk and stare unabashedly and in a loud voice ask me  if I had noticed?  I finally gave up and began pointing these wonder women out to him, it was fun to watch him ogle. How he was ever attracted to me still makes me laugh.

Steve and I went to Greece one year.  We spent a week in Athens and then flew to Santorini and Mykonos for two weeks.  Steve loved the history of Greece, the ruins, the art, the museums, but his favorite thing was going to the beaches in Mykonos.

Strange?  For Steve yes, well no, as they were nude beaches.  He would wake up every morning and say, “Let’s go to the BEACH!”  I was happy as a clam.  We would load up for the day, Steve, completely sun protected and off we’d go.  Steve would find “the perfect spot” right in the big middle of the nude Europeans.  He was in hog heaven pretending to read some book while the naked women flopped around us. He was in utter delight one day when two women sitting beside us struck up a very long conversation with us.  Steve was king of the world!  Boys will be boys, and he always made me laugh.

Steve was a stalker of these celebrities, never discreet about his need to be up close and personal he would go to absurd means to check out the spotted famed person.  He came close to getting accosted by the Four Season security guard (where Brooke was working) because he crossed the “tape” in order to get a good look at his best friend, Silvio aka Stevie Van Zandt.  Brooke had to step in and tell the guard it was her dad.  So unlike Steve to ignore rules at all costs just to be up close and personal with a celebrity, but for some unknown reason they held his curiosity.

Headphones.  Steve had these Sony radio headphones that were ancient and are no longer made.  Actually I still have a stash of them that I bought from Ebay.  As each one would die, Steve always had a back up pair.  He loved this brand because it enabled him to use them inside, outside, in the garage, wherever he was working on a project.  He could listen to NPR and block all other sounds around him.  He never cared a lick that he looked like Mickey Mouse sprouting Jiminy Cricket antenna. Nor did Steve think twice that, while hard at work in the yard he would talk to the radio.  Whether agreeing or disagreeing with whatever program he was listening to, he spoke as if on the telephone to the radio voice at the other end of the headset.  His favorite radio show, “Click & Clack’s, Car Talk” he couldn’t wait for the weekly “puzzler”.

Legs.  Steve really admired his legs.  He claimed them his greatest feature, this I believe is the main reason Steve wore shorts almost year round.  One of my favorite quotes that Steve would repeatedly make was, “Do you realize how lucky you are to be married to a guy with such incredibly good-looking legs?”  Steve was always one of the most humble and modest humans I knew, except when it came to those terrific legs!

I do and always will realize how "lucky," how blessed, I was to be married to Steve Boswell.  I love that he could always make me laugh harder than anyone I knew, never at him but, always with him.  Oh my multi-faceted Steve, how much I miss you. Though I will never be able to laugh with you again, no one will ever be able to take away the happiest memories any one could ever have had. I loved spending my life with you. 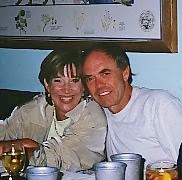 
"I know that there is nothing better for them than to be happy and enjoy themselves as long as they live;"
Posted by Unknown at 5:00 AM