There's something about Judge Judy...

What is it about this show that has me smitten?

Could it be Judy’s long black robe with her little lace collar? Hmm, I think not. I mean if I made a reported $47 million dollars a year I might put a cute crisp white shirt under that black robe. It would have a great collar that flipped up with terrific cuffs that could be turned back in a most fashionable way.  Maybe I’d add some fabulous, yet “Judge-like” earrings and a statement bracelet, or two. A much cuter look to accompany that black robe. Judy, I’m telling you, ditch that tacky little lace collar.

Could it be her wrinkle free face and neck? Maybe, I mean at 72 years old, the body parts that stick out of that black robe are looking really good. I might suggest she find a better hair stylist. Again, to have a show that’s run 19 seasons and is number one in syndication, well, you’d think she could find a “do” that was worthy of her high ranking standards. 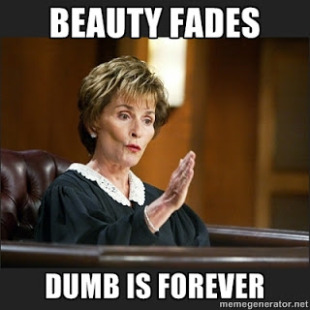 No, it’s not Judy’s appearance that keeps me tuning in daily. I realize watching back-to-back episodes of Judge Judy might be considered…mindless? A waste of time? Silly? Yes, yes, and yes. Perhaps I should do something more meaningful with my weekly afternoons…care for little crippled children, feed the hungry, clothe the naked…read a book. Those would all be worthy aspirations, but not during the hour of 4-5 pm, Monday through Friday.

So what is it about Judge Judy?

Could it be her use of yiddish? Judy handles all these bubbe meise court cases with such chutzpah. The schmutzy litigants seem to kvetch so, that it often causes a kerfuffle in the courtroom.  Say what…? I do love Judy’s use of the Yiddish.

Could it be Judy’s quick sassy, sarcastic comebacks? Might it be the way she rolls her eyes so that no words are necessary? Is it possible that Judy can blast through any ridiculous situation and arrive at a decision that leaves litigants with their mouths wide open in disbelief…until they hear Officer Byrd, ”That's all. The Parties are excused, you may step out.” 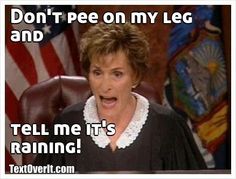 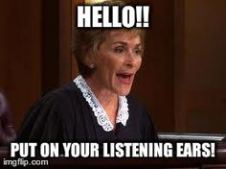 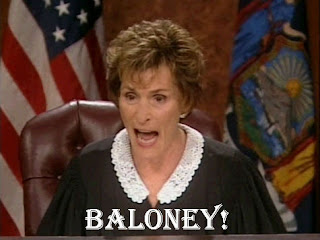 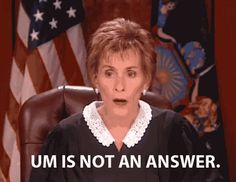 Okay, I admit, I love it all, but why? What draws me to watch this show that is way too much like Jerry Springer with a gavel and an Officer Byrd (I do love Officer Byrd). Why do I love Judge Judy? 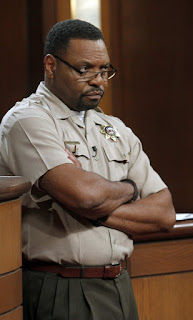 I think everyone can recall a time in life when you found yourself in a situation where someone, let’s just call him “Chuck,” says something so outlandish that you are speechless? You know, a time Chuck is so wrong. Maybe he’s flat out lying, maybe he’s simply being a jerk, maybe he’s over exaggerating, and you know it. Maybe Chuck has just leveled, embarrassed or humiliated you to the point that anyone walking by could easily scrape you off the pavement. The list of maybes could go on and on, but we’ve all been there, right?

So you leave Chuck. You walk silently away, in disbelief that Chuck is being so “Chuck.” It’s only after you have left Chuck that you say to yourself, man why didn’t I tell him this, or if only I had said that, and then dole out one of those Judy-isms. Bam! That’s it. That’s the reason I love her so much.

It’s so fun to watch my dear Judge Judy in action! Oh how I want to spew forth Judy-isms to the Chucks of the world, but I stop short. I remember I have a faith that asks me not to be critical or judgmental, rather, to see Chuck as Chuck, to be forgiving, tolerant and loving. Instead of wanting to level the Chucks of the world, my desire should be to smile at Chuck, send up a little prayer for him and go on my merry way. Maybe there are times I wish I had the chutzpah to dole out a Judge Judy like quote, but in the long run I know it would make me feel more miserable than Chuck. I’m thankful I have a faith that tries to keep me in tow. Thank you, Lord.

Judge Judy will always be fun to watch! She says it, I just think it. Of course, she’s got Officer Byrd by her side, $47 million dollars in her pocket, and a television show named after her…makes a bit of a difference, don’t you think?!

So while I may think like Judge Judy, I’m doing my best to try to WWJD.