When you least expect it... 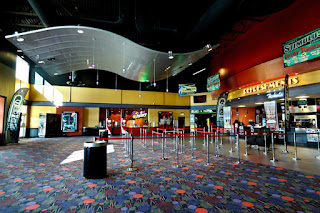 A few weeks ago, on a dreary, cold, rainy Sunday afternoon, I had time on my hands and decided to see a movie. I think I have gone to a movie alone a sum total of three times in my entire life, but this day seemed a good time to put another notch in my lone, movie watching belt.

Steve and I loved movies. We were fortunate to enjoy the same types of films and looked forward to our movie dates. Our neighborhood theatre wasn’t far from our house, so we were frequent flyers of this theatre scene.

I’m not sure how or when it happened, but we became friends with Jay, the ticket taker. Jay is one of those rare people who never meets a stranger and never forgets anything you tell him. Since Steve and I were regulars, we were soon on a first name basis with Jay. As we would walk into the theatre, you could hear our names bellowed across the lobby. We were always greeted with a smile and a barrage of questions about our family, and where we’d been. Jay often made our movie experience more enjoyable than the movie.

As our friendship developed, we also learned about Jay. He loved his birthday and would tell us about his plans months leading up to the date. It was Steve who decided to take him a birthday gift and made a special trip to the theatre to deliver it. The joy and delight on Jay’s face was priceless and the blessing, was in the giving.

Jay told us that eating a Chris Madrid’s hamburger was his favorite thing. One afternoon we made plans to take him to lunch. I think it took him three hours to finish his hamburger, as he wanted to relish every moment of our outing.

I haven’t mentioned that Jay is a person with severe disabilities. Jay was born with cerebral palsy. Over the years, even with extensive surgeries, Jay has gone from a cane, to a walker, to a wheel chair. He has difficulty speaking, swallowing and eating. I’m uncertain of his mental capabilities, however, seeing Jay’s memory at work, well, is evidence he is quite bright.

One evening as Steve and I were leaving the theatre, Jay was outside waiting for a STAR Shuttle to take him home. We visited with him, only to find out he had a two hour wait before his pick-up time. Steve, being Steve, loaded him up in our fairly small sedan and took him to his apartment. Jay insisted we come in and see where he lived. It was a small independent living complex set up for people with disabilities. Of course, Jay introduced us to all his neighbors, proud to have friends visiting. His neat and tidy apartment was well equipped to meet all of his needs.

I think it was about five years ago that Jay told us he was having extensive surgery on his back and legs and asked us if we would visit him in the hospital. Steve was going through chemo at the time and had to be careful with his compromised immune system. Hospitals were off limits, so I went alone. When I saw this brave young man’s scarred back and legs, due to years of surgeries, I became inspired by his optimistic view of life, of his warm and cheerful smiles and of his love of the people he encountered on a daily basis. My respect for Jay, after that hospital visit, grew enormously. He asked me that day why Steve hadn’t come with me. I wasn’t able to be truthful with him, instead I told him Steve had a little cold and was afraid he might be contagious.

Jay was never aware of Steve’s battle with cancer and since Steve’s death, I haven’t gone back to that theatre.

It has been about three years since I have seen Jay, and as I drove into the parking lot that rainy, cold Sunday, I wondered if he was still taking tickets.

Walking into the lobby, before my eyes could even scan the area, I heard the familiar bellow of my name, “Jaannnettt.” I was greeted with his huge smile, his questions about where I’d been, and…”Where’s Steve?” His eyes searched the moviegoers behind me. I knelt down to eye level with this dear friend and told him of our loss. His eyes filled with tears, his voice broke and his response was, “Oh, I never knew…I wish I had known.” My heart tore once again and our loss was tangible.

I gave him a big hug. I told him Steve was in a much better place now and I knew this was sad news to hear. I walked into that darkened movie theatre and sat numb, paralyzed. I thought back over all the years Steve and I had walked into that theatre together. I thought of our first encounters with Jay. I remembered how Steve looked so forward to hearing Jay yell out our names, and how Steve would laugh at every encounter, always asking Jay what movie he had seen lately.

“When someone you love dies, you never quite get over it. You just slowly learn how to go on without them. But always keeping them tucked safely in your heart.”

I haven’t written in the past several months. Some of you have been so kind to ask why I stopped writing. I have no real answer other than the words were simply not there. A friend posted the above quote from an unknown author on Face Book today and suddenly I knew there was at least one more story in me. I think I owe it to Jay and always, to Steve.

James 1:14 “Yet you do not know what tomorrow will bring. What is your life? For you are a mist that appears for a little time and then vanishes.”