A dipper full of stars...

As a child, I lived vicariously through old movies. Whatever my preferred movie of the moment was, I became the star. My all time favorite movie star was Doris Day. Oh, how I loved her in “Calamity Jane”. I would put on my fringed vest, matching green chaps, cowboy boots and stomp around my backyard singing, “Once I had a Secret Love" dreaming all the while of marrying Wild Bill Hickok. My love for Doris didn’t stop there, I repeatedly watched “Pillow Talk,” “That Touch of Mink,” “The Glass Bottom Boat,“  my list of Doris movies was long and wide. She was that adorable girl-next-door; funny, bright-eyed, pristine. She had a wispy voice (that I tried to mimic) and the greatest wardrobe ever. My love for Doris Day was all encompassing.

Months ago, my college roommate and dear friend, Joni called to tell me her daughter had set her wedding date for the first week-end in April. The wedding festivities would be in Carmel and I was to be included in the merriment. Several summers ago, Joni and I spent a week in this precious little town. We had such great fun and I looked forward to returning for this special celebration.

I recruited Brooke to be my date and began making our travel plans. I called Cypress Inn to book a room and learned that this small boutique hotel was full. Doris Day owns the Cypress Inn and this first week-end in April, was to be her 92nd birthday celebration. Geez Louise! I actually thought dear Doris was no longer with us, so I was surprised to learn that our paths were going to cross. I knew, without a doubt, that I would soon see my childhood idol, in living color. Excitedly, I called Brooke with my fantastic news…she was nonplussed, "Doris who?" How could my own flesh and blood not have the love for Doris that I did? Had I had failed as a mother?

Unable to stay under the same roof as Doris, I made a reservation at the next best place, Clint Eastwood’s Mission Valley Ranch. Now, I was sure of catching a glimpse of Doris and Clint. Even Brooke was excited about the Clint possibility.

I need to pause here, for little family history. I will try to make my explanation brief. I have always been a star seeker. I’m not sure when it started, but I find it oddly thrilling to encounter celebrities in unexpected places. Long ago, I ran into Dorothy McGuire, you remember, the mother in “Old Yeller” and in “A Summer Place”… two of my all time favorite movies. I saw Ms. McGuire in a shop on Canyon Road in Santa Fe. I respectfully waited for her to finish her conversation with some random short man, dressed in all black. When, finally their conversation ended, I politely introduced myself and explained how I loved her work. I sort of went on and on about how great I thought she was, a bit embarrassing when looking back. This darling little lady’s quicks response was, “Oh dear, if you think I’m a big deal, hurry and you can meet Bobby Redford (as in Robert Redford), that was him I was just visiting with!” Robert Redford, was the man I had paid no attention to? You gotta be kidding! I missed my opportunity to ogle Robert Redford. I vowed then and there, never to make that mistake again.

Some of you may know that I have two claims to “personal stardom.” In the mid 80’s I was chosen as a contestant for “The Price Is Right.” That’s right, the words, “Janet Swallow, come on down!” were actually announced by Rod Roddy on national television. Arms ridiculously flailing, I hopped onto the stage like a crazed kangaroo, gave Bob Barker a kiss on the cheek and stood, dumbstruck, as he, along with all of television land, wished me a happy birthday. I went on to win a large console television but, lost a “romantic trip to Switzerland.”

A decade later, my friend, Pam and I were chosen as “principal extras” for the motion picture, “Miss Congeniality.” Yes, we were up close and personal with “Sandy” Bullock, “Candy” Bergman and Michael Caine for three long days while they filmed in San Antonio. My movie debut lasted about 5.5 seconds and it forever cured me of the desire for personal stardom.

As out of character as it seemed, Steve was equally enamored with celebrities. Together, we encountered, quite a few stars over the years and I was always amazed that Steve had no qualms about his lack of subtlety when trying to get chummy with the renowned "in the industry."

Traveling with our adult children, they determined we needed to become a bit less obvious in our star search stalking. It was decided a code word was needed when spying on the famous, in order not make such a spectacle of ourselves. The code word became, “Purple.” If someone said, “Purple” it was a sure sign that a celebrity was in our midst. The “Purple Code” has since been adopted by friends and it is a given that, while traveling, the first person to spot a “Purple” is granted a complimentary glass of wine. The celebrity hunt alone, has added extra excitement to our trips and yes, we have spotted quite a few notables in our travels.

So back to Doris, Clint and Carmel. Cypress Inn was hopping all week-end and Brooke and I made several visits in hopes we would see my dear friend. Sitting in the hotel bar, I kept thinking we were seeing tons of celebrities, but Brooke informed me that most movie stars don’t walk around in "I Love Doris Day Fan Club" t-shirts...she sort of burst my bubble.

We were so close to “Purple” Friday evening. Celebrating pre-wedding festivities at Mission Valley Ranch, we were told that Clint Eastwood was playing the piano and singing in the bar not 50 feet away. We made a beeline into the bar where we were on a mission, scoping out every face in the crowd. Sadly, we were informed we had just missed Mr. Eastwood, by seconds. Whoa, that might have been our biggest celebrity sighting ever. Oh well, as Doris loved to sing, “Queˊ Seraˊ, Seraˊ…” 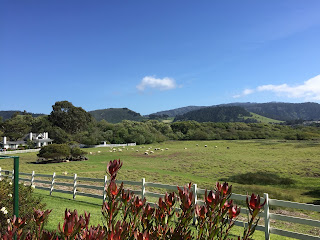 While I've gone on and on with this silliness of catching a glimpse of Hollywood's best known stars, I have aways known who the real stars are in my life. It is those bright stars who have shone through some of the darkest moments in my life. I will never forget my doorbell ringing the evening before Steve's memorial service. Standing there were Joni and Bill, along side my other college roomies, Jill and Cathy and their sweet husbands. It was these dear friends, along with so many others, who became the stars that lit up that dark night sky. There were my friends, my bright shining stars, just when I needed them the most. They held a lifetime of love and friendship and it shone through their tear-filled eyes, their tender smiles and their warm embraces. These friends are life's true stars.


Darling sweet friends, from all walks of life, have shared with me my happiest and my saddest of life's moments. Ralph Waldo Emerson said, “When it is dark enough, you can see the stars.” I am blessed and thankful for all my incredible friends, these stars that have made my darkness bright and my bright days even brighter.

We never did see Doris or Clint, but, after all, who needs them, for I have my own dipper full of stars and I am grateful for each and every one of you.


Philippians 2:15 "so that you may become blameless and pure, children of God...then you will shine among them like stars in the sky"