An addendum to “If Walls Could Talk”…

I have to chuckle when something I write gets feedback. I never know what will strike a cord with someone. As I was writing my last blog piece, “If Walls Could Talk,” I questioned whether or not anyone would be able to identify with the binding ties and curiosity I have with my past homes. I was blown away by the number of responses I received about this post. Whether texts, phone calls, emails, face book comments or running into friends in the grocery store, I have loved your responses. It seems many of us have this connect with past homes we lived in and memories that continue to have a hold on us. 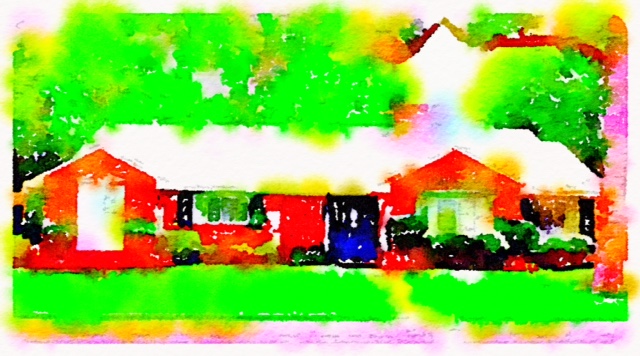 After writing this post, I discovered a friend living in Houston actually knows the family who now lives in my childhood Valley Forge home. The next time I visit Houston, instead of being a drive-by voyeur, I have high hopes of walking the halls of my childhood memories. I can only imagine feeling like Dorothy and friends as they walked the long passageway leading them to the Wizard of Oz. I will be as wide-eyed as Dorothy, the Scarecrow, Tin Man and Cowardly Lion taking in, with great awe, all that surrounds me.

On this subject of drive-by voyeurism, there is a little story to tell. It was probably 12-15 years ago that Steve and I were visiting my mother in Houston. As always, I would drag Steve with me to drive down my old block. (Steve understood, as he was also a drive-by voyeur and also enjoyed seeing all of his old homes.)
The stories were always the same as I pointed out each house and gave a brief synopsis of their history. Susie lived there, she was Catholic, adopted and her mother’s laugh sounded just like a machine gun. Next was Mary, her parents were divorced, making her quite exotic. Mary’s mother taught school, so cool, oh, and their house burned to the ground. Across the street, lived Nancy. Her mother was from Venezuela and spoke better Spanish than English, very flamboyant...and they had a swimming pool. Nancy was always allowed to do things the rest of us were forbidden to do, I wanted to be Nancy.

Then there were Dot-and-Levi. That was how we knew them, one name was never mentioned without the other. Dot-and-Levi had no children and were rather orchidaceous. Dot wore a proverbial french twist, capri pants with matching flats and a thin sweater draped her small shoulders. Levi, was the only “old man” (probably around 35 years old) who had a crew cut. They always had the most perfect house on the block. Sometimes I wondered what it would be like to be their little girl. I bet it would have been magical.

Next was Susan. Her father had a woodworking shop in their garage and behind a cabinet door he had pin-up calendars of scantily clad women. We would sneak into their garage and flip through the months of pinups, deciding which one we wanted to look like. Susan’s dad smoked, so she would snatch cigarettes and we would smoke them behind her garage. Susan taught me to inhale and blow smoke rings…thanks Susan!

On my side of the street lived Fred, who cried and told on us when we demanded he pulled down his pants, along with his sister, Margie, who always dropped her popsicle money in the storm drains...prompted by my encouraging. Patty was my next door neighbor and my very best friend in the whole wide world. Her family was my second family and I can still recall every square inch of that house as well as my own. Patty’s mother always wore dresses, never raised her voice and had fresh grapes on their breakfast table's lazy Susan.

So let’s go back to 12 or so years ago, when Steve was coerced to drive me, once again down Valley Forge. This drive-by voyeur day was no different from any other of my zillion drive-byes with one exception. As we ever so slowly approached my old home, Steve and I suddenly saw a girl of about 16, slightly skinny, with long dark hair, leaving her house/my old house, bouncing down the sidewalk. I was looking in a crystal ball. Seeing myself at that same age, bounding down that same sidewalk, all skin and bones, long dark hair trailing behind me. The film reel in my brain froze in that second. I could see myself at 16 sitting in the bay window of our living room waiting for friends to pick me up. I can hear the quick honk, notifying me of my friends arrival. Yelling to my mother that I was leaving, I can remember running down the sidewalk, jumping in the car. Off we would go. My breath must have audibly caught in my throat and I felt Steve’s hand close over mine. Watching the car full of teenagers drive away, I looked at Steve. I knew we were on the same page. “Well, that was weird!” Weird yes, but what a serendipitous moment, a happy little pearl of my past to hold on to and best part, Steve got it.

A year ago, I was in Midland. I had a little time to kill before I was expected at a friend’s house. Naturally, I used the time for a Sinclair drive-by. Compelled, I stopped the car, took a deep breath and walked to the front door. Not knowing what I would say to the unknown homeowner, I rang the bell and waited. No one answered, so I actually cupped my hands to the glass door to peek inside. Oh, it was still much the same. How I wished my eye could have taken me farther into this old home of mine, but it wasn’t meant to be.

I can now confess my voyeuristic tendencies to all of you because I know there are many of you also long to go back and peer into those rooms, those old, dear, never forgotten friends and pay them a brief, but meaningful homage. 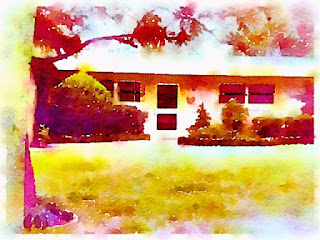