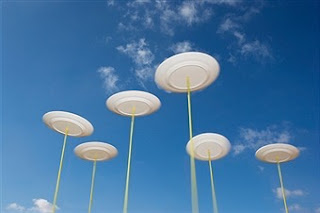 You’ve seen them, I know you have, variety television shows where the guy comes on stage with ten poles and one by one places a plate on top of each and the spinning begins. Soon, one plate begins to wobble, you think it will surely topple off the stick. The performer swoops in giving the plate a deft twirl and sends it back in gyroscopic motion. This wizard of mastery somehow keeps all ten plates spinning until the audience explodes with applause.

Welcome to my Plate Spinning Show. Hold your applause, please. Allow me to present my first spinning plate; the purchase of a cute little 1938 bungalow style cottage just a block away from Brooke and Jared. No, this was not my intention to live just 9 doors down from my children, but, after seeing the house, we all agreed it was a perfect fit for all of us.

Offer accepted, I present to you my second rotating plate, putting my existing home on the market. Frantically, I clean out closets and shelves. How had they so quickly filled during the three short years I’ve lived in this house? In the blink of an eye, my house is on the market. A week later, it is under contract.

Multiple plates begin spinning. I perfect my juggling act. I realize I am putting the Reverse Matryoshka Principle (RMP) in place. I have serious work to do.

Matryoshka Principle? You know this term, even if you don’t think you do. Named after the Russian Matryoshka nesting dolls; one little wooden doll nestles into a larger doll and so on and so forth until you wind up with a family of stair step dolls that can all be housed in one large doll. 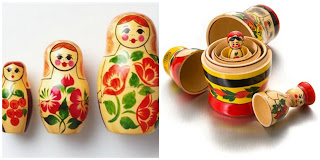 My RMP starts out with one large home. I’ve spoken of it often, the home Steve and I built that held not only precious memories, but a myriad of stuff. When I say stuff, I mean stuff. Not only did this wonderful home hold rooms full of furniture, but it also held closets full of our children’s things. When you add up the “things” that four children possess but have not taken, you wind up with not only overstocked closets, but an entire floor of a walk-in attic exploding with extra treasures, unused furniture and absolute junk that simply couldn’t be thrown away.

My largest Matryoshka house was soon to be replaced by one almost half its size. How on earth I would fit all of my things into this new home? The fact was, I couldn’t, so the kids took not only their designated stuff, but also carted off left over furniture, lamps, art, kitchen items and garage equipment. All of this enabled me to have room in my middle sized Matryoshka home.

It was when I began to rattle around in this now, too-large-for-one-person-home, the RMP began again, and I’m once again cleaning out, throwing away, purging and simplifying. My Plate Spinning Show is reaching a crescendo, plates are whirling.

This new tiny home is half the size of my current home, I love it. It will in no way hold most of what I’m currently boxing, but until I’m in and busting at the seams, my stuff is going with me, at which time I will do my final purge.

Did I mention that the wizard of mastery spun ten plates at once? Yep, so to prove my juggling skills, more plates need be put into motion. The plate of having additional work done on the tiny home has started its spin. Then there’s the spinning plate of the Meabon family moving in with me for an undetermined time while they remodel their home. This is my favorite spinning plate, and one that I must run back to frequently to keep it from toppling off its stick.

My last plate to spin finds me on a plane headed home. I have just spent this past week attending a writing seminar at Princeton Theological Seminary. How cool is that.

It was quite serendipitous that I had lunch early in the year with a group childhood friends. One of them was Jane Pettit who, among other things, writes a beautiful blog, https://isplainasjane.com (don’t miss the chance to read her pieces, they are insightful and inspiring). Jane invited me to join her on this Princeton writing escapade and plans were quickly made.

Little did I know in February, that by June, I would have bought one house, selling another, and have plates spinning wildly while running back and forth like a chicken with my head cut off trying to keep them all in motion. I thought of backing out of our Princeton adventure more than once, but I felt a real nudge to attend and it proved to exceed my expectations.

I struggle with what, if anything, I should do with my writing. This craft is new to me and one where I feel very ill-equipped. I pray often asking God what it is He wants me to write. I feel strongly that this gift of writing is just that, a gift, and I I’m trying to be a good steward. I was in hopes that this seminar would give me tools, a map, a route to show me what my next steps should be in going forward with my writing.

Time will tell as I begin to assimilate all that I learned during my time at Princeton. If nothing else, it has enabled me to renew a lovely friendship with a precious friend that I will have for the rest of my life. Thank you Jane for our great adventure and may we hear God’s voice as He creates new paths for us to follow. 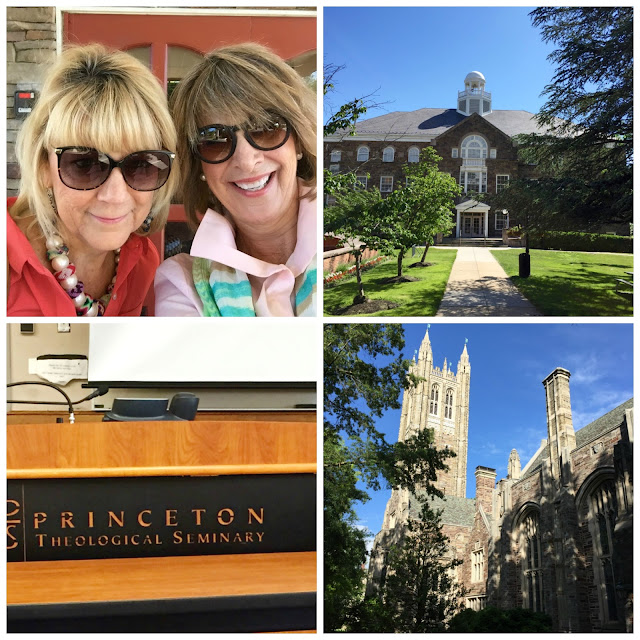 So thank you ladies and gentlemen for taking a moment to attend my Plate Spinning Show. You can find me spinning my plates throughout the next few months. No applause  necessary.

Mark 4:24  And he said to them, “Pay attention to what you hear: with the measure you use, it will be measured to you, and still more will be added to you.”