Growing up, I was always embarrassed that my mother’s name was Syble. I wished her name was Betty, Ann, Mary, Grace, maybe Kathleen… but, Syble, this was simply not a normal mother name.  (I, now love her name and wish we had another Syble in the family.) 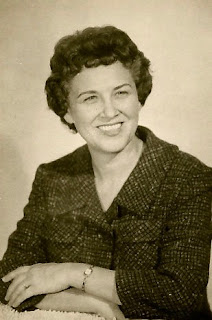 While I was embarrassed of Syble’s name, I was mortified that she had a good friend named Irmadean. Yikes! Irmadean. I hope she had a beloved grandmother named Irma and a wonderful Uncle Dean. What was her mother thinking?

Syble and Irmadean were two peas in a pod. Being children of The Great Depression caused them to understand and enjoy their frugality. When they weren’t playing bridge, they were bargain shopping or doing some DIY project, way before DIY was popular.

One afternoon, I came home from high school to a bed filled with new neon colored polyester dresses. The year was 1970, so lucky for me, neon was in and Syble and Irmadean had hit the jackpot! Lime green, hot pink, hurt your eyeballs yellow and orange dresses with big zippers, big collars and thankfully, short, just not quite short enough for the’70’s. It seemed Irmadean had found the deal of the century at, none other than, drum roll... Weiner’s. For those of you that didn’t grow up in Texas in the 50’s, 60’s and 70’s, Weiner’s was a department store that might have competed with K-Mart or Walmart, not quite up to Target standards. Weiner’s, even the name was appalling. Being the teenager I was, I was a bit of a store snob and to think I now had a bed full of Weiner’s dresses, gag. 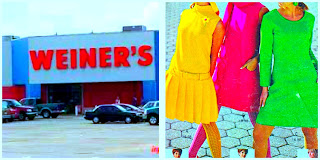 Well, I assure you, mother made sure I wore each and every one of those polyester designs and while I glowed in the dark, compliments were given and inquiry into where had I found these precious, Goldie Hawn type outfits. I lied and mumbled something about the junior department at Foley’s.

Another folly that Irmadean introduced to my mother was contact paper. Their first project was contact papering the top of our wooden coffee table. They had found this faux marble paper (probably at Weiner’s) and decided to slap that vinyl type plasticky paper onto our rather battered coffee table. Unfortunately, this table was round and contact paper is much like fly paper, it sticks to whatever it touches and becomes permanent. They spent hours measuring, tucking, cutting and smoothing out air bubbles until, “Voila!” we had an almost new, marble top coffee table. Next, oh they didn’t stop at a simple table, no, they went on to contact paper the top of our washer and dryer in none other that a lovely neon floral design. Next, the tops of every bedside table in our house, the built-in wooden topped desk in our kitchen was papered in a contact paper that was made to look like…wood! Syble and Irmadean were out of control and two households were slowly being beset by contact paper.

Where Syble and Irmadean were concerned, I never knew what I would come home to find. The final straw was the day I came home to Syble and Irmadean on the floor of the hall bathroom, both leaning over the toilet. I knew immediately they were contact papering not only our toilet lids, but the seats as well. Three bathrooms, three toilets all in stunning color coordination with the pea green tile in bathroom #1, the pink/peach tile in bathroom #2 and of course, the guest bathroom was papered in left over and pieced together faux marble. Who doesn’t want a marble toilet seat! 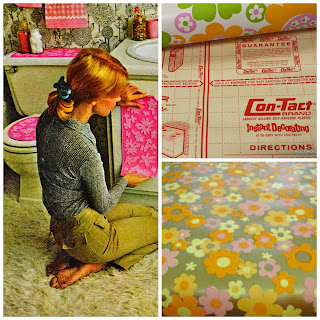 The worst part of contact papering toilet seats is that once the contact paper is worn thin, the result is the sticky residue from underneath. Yep, our family walked around for the longest time with underwear stuck to our behinds.

I know I haven’t written in a while and I have no idea why this memory of my mother and Irmadean and neon dresses and contact papered toilet seats came to mind, but it made me smile.

I think the friendships of women are such sweet, precious bonds. Friendships that are formed from having liked interests, from being moms together, side-by-side neighbors, friends that share a work place. It doesn’t really matter how these bonds of friendship are formed, what matters is the lasting memories they leave behind.

When I think of the many friends that have flowed through my life, I marvel at the legacies that have left their impressions on me. It is the friendships shared as young girls, teenagers, college years, newlyweds, young moms, old moms, empty nesters that, well, when you think about it, are much like contact paper.  There are times in every good and lasting friendship when it is necessary to smooth out those air bubbles, times when you need to undo and redo and work together until the fit is perfect and the adhesion is lasting.

Syble and Irmadean were right about one thing, it takes two to apply contact paper and to create an everlasting friendship. Thank you ladies for teaching me how to be a good friend.

1 Samuel 18:1 "the soul of Jonathan was knit to the soul of David, and Jonathan loved him as his own soul. "