Having a Man as Your Son...

It was 35, yes that’s what I said 35 years ago today, that I was introduced to motherhood.  I was a mere 23 year old youngster who thought I was fully capable and totally knowledgeable of becoming the perfect mother--holy moly was I young and oh how much I had to learn.
So it was that John Brenton Swallow became my son.  He was a perfect baby in every way.  Beautiful, good, never cried, slept through the night...well in 35 years, that’s what I have chosen to remember.  What I also remember is thinking that with every milestone Brent made, my thoughts, my paradigms, my imaginings for his future and the possibilities of his distinction grew. 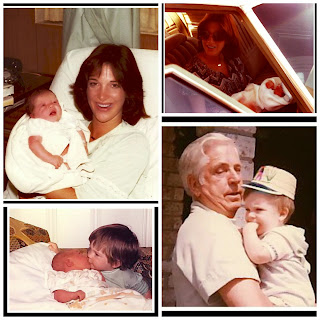 I have come to realize that most of us, as parents, start out thinking our children have all the potential in the world to become whom ever they may be or we wish them to be.  Some of them have natural tendencies that lead them to fame and glory and others, because of their genetics or amazing upbringing (that would be parenting), turn out to be an inspiration to humanity.  These tiny humans are filled with promise, possibilities and capability and as a parent, you believe that your child has the potential to do it all.  You also may believe, as I once did, that you hold the keys to molding your child into the person they are “meant to be”!
If this were the case, if I had anything to do with the amazing human being that Brent has become, it would be a miracle.  At 23 years old, I found myself in a heap of tears when I put my own mother on a plane back home after she had spent a week helping jump start us.  The doors of that plane shut and I held that little bundle in my arms and thought...I have no clue what to do!
Well, Brent was a tough little nut and he survived in spite of my many foibles.  Thankfully, we had a neighbor living across the street that was several years ahead of me.  Janice Henry was raising with three children of her own and she quickly became not only my good friend but my very own Dr. Spock.  Whenever there were issues...constant crying, rashes, temperature, colds, constipation...Janice was my go to.  Every mom needs a mom just a bit older and more experienced than she is to walk her through every stage of motherhood.  That is my profound piece of wisdom for today!
So Brent grew in spite of me.  He was a bright and eager learner.  He was curious and loved to discover.   Brent loved for me to read to him.  He would sit for minutes at a time while I read “The Monster at the End of this Book”, “Thingumajig Book of Manners”, or “Never Talk to Strangers”...you know all the children’s classics.  Brent was so exceptional that before I could turn the page he could recite from memory what the next lines would be!  Amazing, he was Mensa!
By the time Brent was a little over a 20 months old, Brooke came along.  It took some adjusting for Brent not to be the only one being doted on and coddled.  He tried several maneuvers to do his sister in.  The first chance was when I was feeding Brooke.  She had only a diaper on and Brent lovingly came up, looked me in the eye and began gently rubbing his baby sisters tummy.  Oh, the bond has been made!  I was so proud.  I smiled down at my precious boy and Brent, eyes still locked on mine, ever so gently took a chunk of his sister’s tummy and pinched it as hard as a little 20 month old fingers could.  Suffice it to say, that was the last time he tried that trick.  Incident #2, Brent was sitting beside his sister “reading”.  Brooke was propped up in one of those canvas bouncy chairs and suddenly there was a loud thud and howling coming from Brooke.  Guiltily Brent admitted that he had hit her on the head with his book because “she wouldn’t read to me Mommy.”  Fortunately, they soon found themselves to be great playmates and to this day have an extremely close brother and sister relationship. 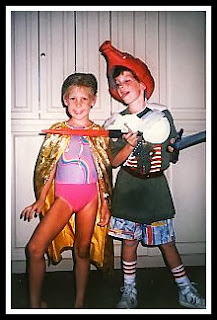 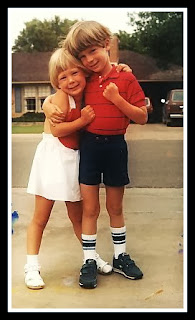 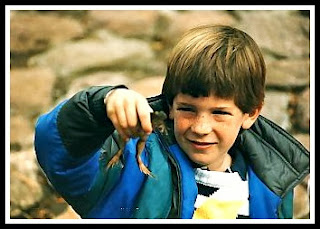 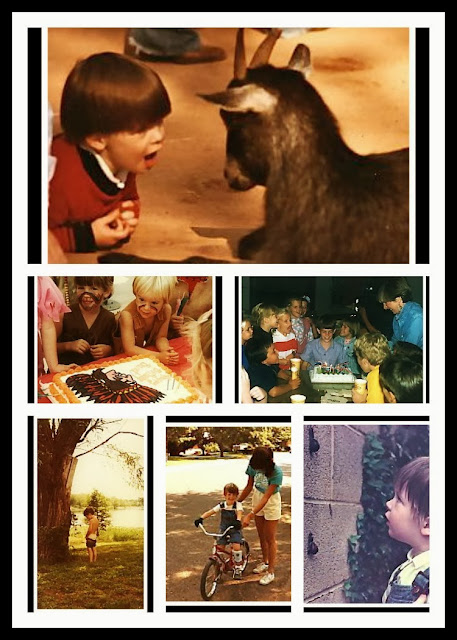 The kids were 2 and 3 years old, and we joined Midland Country Club.  To this day you will hear both of my children complaining about how I drug them to the pool every day of the summer - how they baked in the hot West Texas sun, were made to play and swim forever, to jump off the high diving board (those were the good old days) over and over...whah, whah. Perhaps because it was the only place in town where all their friends (and okay I’ll admit it mine too) were to be found.  I will regretfully admit that sunscreen was not my top priority...I told you at the beginning I was a very young mother and I, now, realize that I might have found other summer activities to occupy their time instead of burning them out hanging out by the pool every day.  However, even today on a warm day, you will often find Brent by some body of water...whether it’s swimming or lounging, so I must not have done too much damage with his “water issues”. 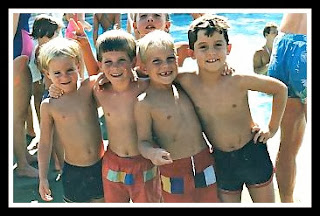 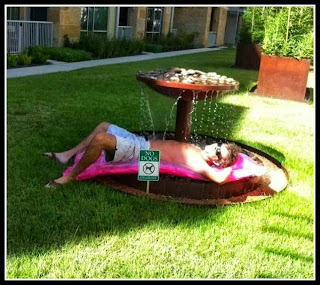 Brent was either in 1st or 2nd grade when he became very enthralled with the Death Penalty.  I have no idea where his questions stemmed from but he wanted full explanations of why and how this could happen.  I tried my best to give very non-bias answers, explaining in 1st grade language what and how the criminal justice system worked--not an easy task for discussion.  Brent quickly determined that he was adamantly against the Death Penalty and he loved to discuss and argue his opinion with anyone who would listen.   I believe this is where hard wiring comes into play.  I have found that we parents really can take little credit for who our children turn out to become.  I have come to realize that children come with a great deal of wiring, they are who they are and it is up to us as their parents to try to tap into all of their strengths, their gifts, their interests and encourage and support them to the best of our ability.  To this day, Brent remains passionate about a multitude of issues and concerns and continues to give his opinions.  They are wise and considerate and always tolerant of others.
Brent had a love of drawing from a very young age.  He would sit for hours at his little table in his room and go through reams of paper, his imagination flowing and his little fingers filling pages with his art.  Fifth grade found Brent not only drawing but writing.  His teacher, Mrs. Montgomery, was fond of having her students journal and write creatively...wherever their curious minds took them at the age of 10.  Brent found his love for writing essays such as “Santa’s Deadly Day”, illustrations and all.  This was the story of a rather psycho Santa coming down children’s chimneys and killing the entire family with a chainsaw, oh my...  There were many other gruesome stories that followed, for some reason I never worried that this was weird or unusual.  Instead I kept “Santa’s Deadly Day” as I found it so…”clever”!  Today if your child wrote a paper like that, he would be expelled as the next David Berkowitz.  Remember, the "Son of Sam”?  Thankfully we said good-bye to those writing days, adiós Steven King. 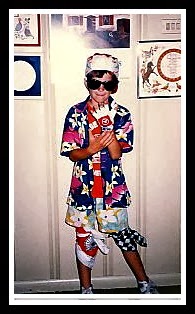 Brent always kept us on our toes.  Mischievous and testing, yes, but he also always wanted to please us.  He was obedient, to a degree, and respectful.  Brent has always been able to walk into a room and light it up.  He makes people laugh without intention and will listen to anyone pour their heart out with all of his attention.  Brent has more lifelong friends than any one I know.  He is unassuming, thoughtful and loving. 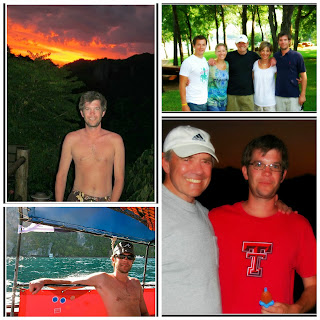 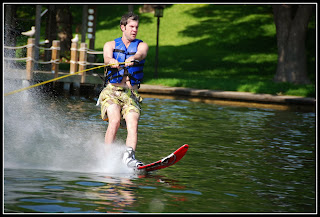 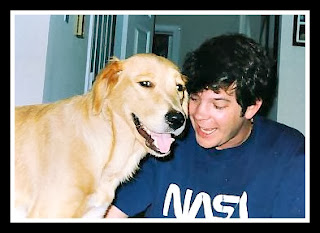 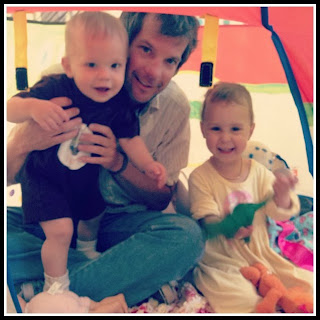 Can you tell I have an amazing son?  A son I will forever be proud of because of his caring, his truthfulness, his integrity, his loyalty and his character.   A son who has stood by me when life has been most difficult.  Brent has remained rock solid by my side whether he was 15 years old or 35 years old.  I am blessed to be the mom of one of the finest men I know and I love him dearly.
Happy 35th Birthday Brent!
I love you with all my heart,
Ma 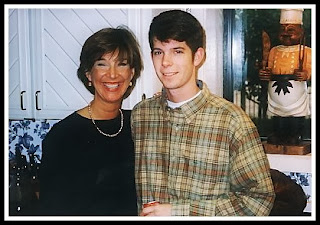 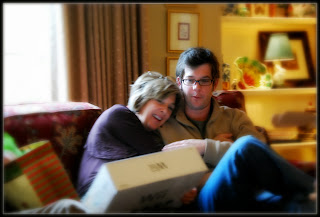 “Motherhood is about raising and celebrating the child you have, not the child you thought you would have. It's about understanding that he is exactly the person he is supposed to be. And that, if you're lucky, he just might be the teacher who turns you into the person you are supposed to be.”
― Joan Ryan, The Water Giver: The Story of a Mother, a Son, and Their Second Chance 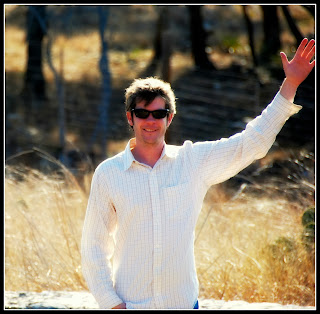