Trudging Through a Thunderstorm...

I feel the sudden need to go back to my September 9th blog entry titled “Lifelong Friends”.  Ann, Louann, Donna...start gagging because the harsh truth is about to be told...

As most of you know I’m an early morning riser and walker.  Home or away, I’m up and out.  Our trip to St. Pete’s was no different.  We had a long, full, very fun day the day before and so everyone else slept in while I started out on my beautiful early morning walk.  I found a path from the Renaissance Vinoy that lead straight along the waterline.  It was perfect the view, incredible.  The water so clear and bay calm.  Sailboats and yachts were drifting, local walkers and runners with their dogs beside them were sharing the pathway with me.  As is the way in the South, friendly quick nods, smiles and brief hellos were exchanged.  The homes set well back from the waterfront were quaint, older homes of St. Petersburg...those wonderful “Southern Living” magazine homes.  There were blocks and blocks of them before the mega mac-mansions cropped up.

I was loving this early time, quite solitude.  I was lost in the surroundings, but also in thoughts of memories of Steve, life without him...it had been my first trip since he had died and I was filled with a jumble of emotions.

This day, the sun was coming up, it was already warm but breezy and I in the distance I saw a bridge that I decided I would make my destination for a turnaround point.  I walked farther than I normally do and about 45 minutes into this glorious fast paced stroll I looked up and saw a beautiful rainbow.  Wow, living in South Texas it had been ages since I had seen such a sight.  I actually stopped a took a picture with my cell phone. 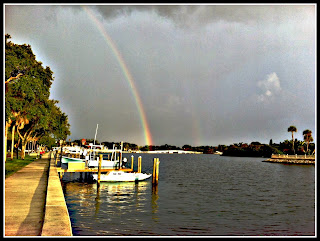 Continuing on, deep in my own thoughts, I looked up and noticed a large ominous black cloud that seemed to be heading toward the water...and me.  I asked an older, wise looking local woman about the cloud, “Good morning, do you think we will get rain from that dark cloud, it looks pretty threatening?”  Her calm reply, “Awe, you never know around here, often the wind just blows them away and other times we get the most incredible thunderstorms from those clouds.”  She kept walking…so I thought if she can, I can too.  I continued toward the bridge.

Now here is when Steve would have said ten minutes before I ever asked that old woman anything, “Janet,  that looks like a treacherous (his favorite overly dramatic word) thunderhead let’s head back.”  I would have argued and plead with him to continue on with me and he would have taken my hand and drug me back like a small child.  Oh, Steve this is why you still need to be with me.

It was about two minutes later and there was this treacherous, truly treacherous bolt of lightning followed by an immediate crack of thunder.  Whoa, that was enough for me, I turned around and hightailed it back to the hotel!  The hotel, which was now about three miles away and no cover in sight,   only clear land with a path and miles of wide open ocean.  I walked faster, the most gigantic raindrops started to fall out of the now freakishly dark sky.  I started running, wham another zap of lightning, crack of thunder and torrential rain.  Great, where in the hell was that stupid old woman with her dog?

All I could hear was Steve’s voice reminding me of the dangers of lightning, my heart was pounding...another jolt cracked through the sky.  Through the rain I began frantically looking for shelter, someone’s porch, a cover, something...there was only nature all around me.  My head down to keep the slashing (drama) rain out of my face I kept moving, the fourth jolt and I thought, okay the headlines will read “Poor widow, dead from lightning while her ‘lifelong friends’ slept soundly through the morning.”  Where were my thoughtful friends and why weren’t they coming to my rescue?  They knew I would be walking this morning.  They could hear this raging storm.  What a crummy bunch of lifelong friends...a shelter, I suddenly spotted some kind of YMCA!  I ran for cover.  There stood the dumb old woman and her dog,( neither had a drop of water on them) along with about 20 other people.  I was the only drenched soul in the group.  No one spoke everyone just stood calmly watching the torrential downpour.

Soon the rains began to let up.  The sky lightened a bit, a few bystanders ran to their parked cars in the nearby parking lot.  The others remained like mannequins, no plans of going anywhere.  I stood there like a dripping soggy noodle and thought, “Where are my deadbeat friends?”  Finally, it seemed the worst of the rain had passed, I was already drenched so I (no one else moved) headed out.  I was about two blocks from the shelter and feeling like I was almost home free, stomping through ankle deep puddles and swearing under my breath about my “friends” when holy moly more lightning strikes, thundering roars...man I ran!

Well, of course, I’m here so I made it safely back.  Everyone woke to a bright sunny morning all chipper and cute and rested and I whined, really whined my way repeatedly through this above tale ad nauseam.  Whaa, whaa…my lifelong friends were non-plussed by my saga of tragic woe.

A side note here about my lifelong friends...funny how one, okay I love to try to point a finger of blame on the innocent.  I knew it was all my fault that I didn’t turn around long before I did.  I knew they were innocent in having no clue I would be dumb enough to be out walking in a raging storm.  In short, the good thing about lifelong friends...they accept and love you in spite of yourself.  Breathe easy girls you’re officially off the hook! 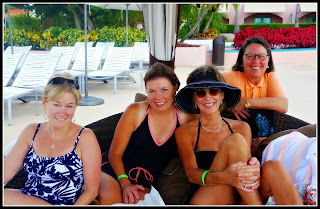 While that storm was, in reality a scary place to be walking I dare say I feel like most of us have all walked through some treacherous storms of life.  Our family has been in a hurricane season for quite some time now.  Steve’s health issues began about 9 years ago when he was unexpectedly diagnosed with Cardiomyopathy.  We then began to deal with other family health issues that knocked us off our feet and onto my knees in prayer.  Then in November 2008 the Glioblastoma was found, and the final blow was Harper’s in utero diagnosis of an omphalocele.  Our storms were raging, lightning of fear was piercing, thunder of the unknown was shaking our world and shelter seemed no where in sight.

I started out much like I did on that early morning walk in St. Pete’s head up walking with purpose into a future that seemed bright with a wonderful marriage, adult children that were stable, happy, healthy and settled and blindly walked head first into a series of horrid torrential storms.  So, what did I do?  Well, as in my early morning walk, when I first sensed my fear I eschewed it.  I denied our problems, Steve would be fine, he was in great physical shape.  I walked on.  Then the skies grew darker, other family health issues cropped up that not only made me do an about face but caused me to look upward for help and answers as I plodded along on this path.  God’s answers came slowly, and some those health issues took years to overcome.

The piercing stab of lightning that ripped my heart into happened when we learned of Brooke’s first unborn child had a birth defect that might well have been fatal.   This strike found my heart paralyzed.  I was unable to move forward.  Headlines reading, “Grandmother of unborn granddaughter and mother of precious daughter dies of a broken heart.”

It was all too much.  I asked God why?  How much more?  I bent my head against the raging winds and water and stomped my way through the puddles of tears that were knee deep and I pressed forward.  I never lost my faith.  Did I question God?  A lot.  Was I angry at life?  Absolutely.  I was so weary of being the poster child for “Pitiful.”  I walked on, trudging, plowing until I could find moments of shelter.  Those brief moments when I could see God, feel his presence, know he hadn’t abandon us.  It was here I could take a breather, a respite from the driving storm.  Inevitably, I would strike out on my own again, feeling the storms had calmed and boom, life hit with a tumor recurrence that finally lead to Steve’s death.  Oh, that is a storm I pray I never have to go through again.

I often wonder what Steve’s storm must have been like, knowing his time here was limited?   I know he feared being bedridden, being unable to speak, to communicate his thoughts.  Steve weathered his storm seeming fully equipped for whatever elements came his way.  God was merciful and Steve’s few fears were short lived.  He was allowed to leave this world only a few days after his last serious seizure.  What amazing grace God granted us!

I am reminded of the song by Rogers & Hammerstein from “Carousel” You’ll Never Walk Alone:

That day when I finally made it safely back to our hotel in St. Pete’s I said a quick prayer of thanks that God did allow me to see the end of this storm.  I also know what is more important is that God has allowed Steve to finally see “a golden sky and the sweet silver song of the lark.”

Today I may feel that my “dreams are tossed and blown” but one thing I am positive of is that I am never walking alone,  I can “hold my head up high and not be afraid of the dark” because my focus is on a God who is bigger than any storm of life and he walks before and beside me always.