My shower was running, reaching for a brand new bar of soap, I shut the shower door. Grabbing the existing sliver of soap, I hold it in the palm of my right hand, taking the new bar of soap, I smush them all together. My mind had been a million miles away, not thinking what I was doing, my actions on autopilot. I look down at my hands, and smile. I had just made, in Steve’s words, “turtle soap.” 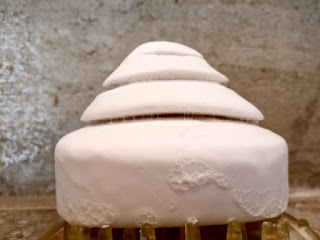 When Steve and I married, I thought his ritual of “turtle soap” was quite bizarre. Steve thought nothing of melding his old soap with his new one, it was simply...prudent. I remember thinking it was, well…peculiar. I had always thrown the sliver of soap away, replacing it with the new bar. As our married life evolved, I continued to follow my standard of soap disposal. Though we never discussed it, I think it might have irritated Steve that I never made turtle soap, as it was, simply the “right thing” to do.

Steve had a few idiosyncrasies, aside from turtle soap, that I found amusing and he thought, perfectly normal. Okay, to be completely honest, some of these peculiarities were annoying, but they were so Steve that I often simply shook my head in wonderment.

Buying multiples. When Steve found something he really liked he bought a ridiculous amount. Tennis shoes. When I first met Steve he had 12 identical pairs of tennis shoes all lined up in his garage. His philosophy, buy it while you can because when you need to replace it, it is no longer available. As a result of this mentality, we had extra toilet seats, multiple faucets, extra sprinkler heads (you could have started your own sprinkler company with the number of spare heads he owned), auxiliary toasters, supplemental toothpaste, toilet paper, shaving cream…you get the picture? It took me a while to understand this odd, hoarding behavior, but after a few years, I found, I too had bought into this mentality of never running out of anything.

Driving and parking. Steve had a very opinionated way of driving, and even more so, very definite ideas of how to park a car. Prior to Steve, I would drive into a parking lot, find the first parking place nearest my destination,pull in and park, never giving it a second thought. Oh, this was wrong on so many levels! Steve felt strongly that you had to park on the end of a row, ensuring only one side of your car was vulnerable to someone hitting your car door with theirs. Next, you should park as far away from said building as possible, making certain other cars would not park around you. Finally, and this was cardinal law, it was imperative to always park uphill so that shopping carts wouldn’t roll downhill and hit your car. There were times we spent a good 10 minutes pulling in and out of parking places because it simply was not a good fit. Trust me, at the time, this was not amusing.

Totally annoyed, I would slam the car door, and march into the store without him.

Cinnamon chocolate cake. Steve made a great cinnamon chocolate cake. The recipe had been his aunt’s and it was written in a very odd order, unlike any other recipe I have ever seen. Those of you who know me, know I’m not real big on following instructions. When it came time for me to make Steve’s favorite dessert, I simply dumped all the wet ingredients in a bowl, followed by the dry ingredients, then mixed and poured it into the pan. Oh my word (Steve’s favorite expression), one would have thought we were reenacting the Civil War. We would yell and argue over that stupid recipe until one of us finally had to walk away. We wouldn’t speak to one another, until the cake was iced and ready to eat. All was forgiven until it was time to make another cake.

Yard work. I hated working in the yard, but with Steve's green thumb, he had a real ability to making things grow. Over the years, he gradually lured me into the flower beds, craftily teaching me how and when to prune, what plants needed which fertilizer and expounding on the positive effects of mulching. It didn’t take long before Steve had me working right beside him and enjoying the fruits of our labor.

True life crime. Steve loved watching television shows about murders. He loved Dateline, 20/20 and was in hog heaven when he discovered 24-7 television channels airing episode after episode of blackmail, betrayal and murder. It weirded me out at first, especially when Steve would say of the murdered wife, “Her husband did it!”

Thinking back, I am reminded Mary Elizabeth Frye’s poem:

When I stood in my shower and looked down at the turtle soap that I had subconsciously molded, I smiled. I realized Steve was right there beside me…”in a thousand winds that blow” and “the diamond glints on snow.”

It is now second nature for me to buy in quantity, okay, maybe not a dozen pair of my favorite tennis shoes, but when I buy one package of toilet paper, it is always followed by a second, and that goes for batteries, light bulbs, I have cabinets full.  I smile and hear Steve’s quite voice telling me its best not to run out. He is “the sunlight on ripened grain.” I hear his voice “in the gentle Autumn rain.”

It’s difficult for me to make Steve’s favorite cinnamon chocolate cake, but when I do, oh how I wish we could be standing together fighting over that stupid recipe. When I “awaken in the morning’s hush,” Steve fills my thoughts with “a swift uplifting rush.”

I may not have succumbed to Steve’s parking passion, but I hear his warning to me as I slide into the parking place located right next to the shopping cart return, and I smile.

Though I may not watch all the true crime shows that Steve so loved, I so wished for him when I was binge watching “The Making of a Murderer.” Oh my word, he would have loved every sordid minute of it!

The yard work I now so love, because here is where I hear Steve so clearly…”prune from the Y in the vines,” “cut this bush from the bottom,” “unbelievable, look at all the blooms on this sucker!”

“Of quite birds of circled flight” Steve is in every “soft star that shines at night.”

I know I will always make Steve’s turtle soap. I will always smile at my precious sweet memories, for you see, I will not “stand at Steve’s grave and cry” for I know “he is not there, he did not die.”

Isaiah 49:16 “See, I have engraved you on the palms of my hands; your walls are ever before me.”